The Apollo 11 spaceflight in 1969 lasted eight days in total (and three hours, 18 minutes, and 25 seconds if you wanna be a pedant about it). For as long as it took them to fly to the moon and back, we’ve been writing our novels. That’s something to think about. One small step, and all that. 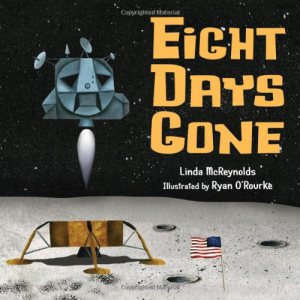 A book about men on the moon, not early pregnancy. (Although the rocket does look a little startled.)

As it happens, I’ve always been happy to look up and see that it’s there, without taking the trouble of hurtling through space in a rocket for one small step (or one giant leap for that matter) on its famously-cratered surface. (And maybe you’re one of those theorists who don’t believe Apollo 11 went either, that film director Stanley Kubrick faked the whole thing with smoke and mirrors.) Whatever your thoughts on the matter, you might like to click on this link while you carry on reading, and listen in to my favourite track from Brian Eno’s 1983 Apollo album, composed for a documentary about the moon landings.

But what has the moon got to do with writing? Lots, of course! It’s one of my favourite props, for a start, (other favourites are clocks and wallpaper, although sideboards appear to be moving up the Madder Hall charts). 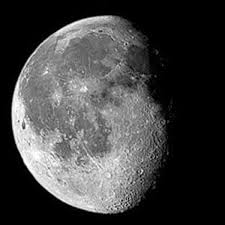 A waning gibbous moon, such as we’ll see in the sky tonight.

A good long lean on your windowsill, late at night (moon-spotting tends to less successful in the daylight hours…) and you’ll find yourself pulled from the grotty interiority of your head and reminded that, hey fella, you’re only a pin-prick in the Grand Old Scheme of Things; but you’re not less of a person for that – you’re more. You are made out of stars (so the science folk tell me), and here you are, living on earth, breathing air, being human, all sharing this moon. If you let your mind stretch up to space for a bit (on its tiptoes) and feel the vastness of the universe, you’re less likely (I reckon) to find yourself writing this sort of thing (from the very wondrous Wondermark by David Malki: much amusement to be had if you click that link):

More wondrousness can be found at http://wondermark.com

I have one more reminder for you, in the shape of Graham Greene’s short story, The Invisible Japanese Gentlemen (full text here), that a good novelist always looks outward as well as inward. Your first job is to notice. Go out in the world and just, you know, notice shit. If you don’t take the trouble to look, you won’t see it.

And, talking of looking: well, looky-here. How many (invisible) Japanese gentlemen are there in Greene’s story?

I love it when a plan comes together.