There are currently no fireworks in my novel. Also there is no voting.

As I wrote about in another post it’s okay to be rude (I think) if the rudeness is part of the story. If you’d like to read about rudeness, I recommend reading that post instead. (Try rolling your Rs while you say that.)

As for smoking: set your book in the 70s and you have to have fags. Everyone smoked back then – even me, and I was only six at the time. What we think of now as ‘air’ was largely composed of sexily-exhaled plumes of smoke. Decorating was made fun by the thrill of removing old paintings to see the actual colour of your wallpaper. (In the sixties they painted things black; in the seventies we stained them brown.) Dedicated Cig-Wives were drafted in by the NHS to waft Russian cigarettes over the mouths of newborn babies, readying their lungs for the outside world. Before we had Thatcher, Thatcher, Milk Snatcher, a misguided government stepped in to deprive nursery school tots of their state-funded John Player Specials. But luckily someone picketed about it and sanity was restored. Non-smokers were pilloried. And I don’t mean we made fun of them; I mean we put them in a pillory. And threw lit cigarettes at them.

This girl refused to smoke.

Every so often, I’d like to light up. (More often in November than any other month, if I’m honest.) It’s eleven years since I last puffed on a choker. I promised myself I would stop at the age of 30, and unlike some other things I’ve promised over the years I actually stuck to that one. It wasn’t even hard, to be honest. My daughter was young at the time (that’s her in the stocks, by the way) and my 25 a day habit had dwindled to one or two crafty fags out the living room window. (In the 70s I used to sleep with an ashtray on my pillow. And smoke two, yes TWO, fags before I could stand up in the morning.) (And you think I’m joking about this – and I sort of am – but only because it wasn’t the 70s when it happened; it was the 90s, when I was temping in London. The ashtray on the pillow – true, I’m afraid. Feel free to unsubscribe if you no longer want to know me.)

Harold Wilson smokes it up in 1975. Imagine David Cameron cracking out the Silk Cut… not that he’d do that, of course: he’d be the stingy bastard who never buys his own & wants to bum your bloody fags all the time.

What I miss, occasionally, about smoking is having a cool thing to do with my hands. (Same reason I play the piano.) When you’re caught short in public without a good book or a friend or a random, willing stranger, a cigarette is a fun way to look less alone. (I bet the cigarette industry hates smartphones.)

In literature, too, a cigarette is a useful prop. And a writer needs props. You need props for lots of reasons – who wants to look at an empty stage? – but a key one is this: they give characters something to do with their hands. Or their feet. Or their buttocks. (I’m thinking of chairs here.) The subtle manipulation of props has dragged many a possibly ponderous page of internal monologue into the here-and-now (there should always be something on stage for your reader to look at). Using props can add rhythm and flow to dialogue too (whilst helping you cut out pesky speech tags: if somebody’s handling a prop while they’re speaking, there’s no need to tell us who speaks). Another word beginning with ‘p’? Try pace. Punctuation in sentences partly exists to avoid ambiguity (‘eats, shoots and leaves’) but it’s also controlling the pace. If I want you to stop. And think. Really carefully. I can use punctuation to make you do it (mwa ha ha!). If I want you to wait just a little bit longer to find out [the killer’s name; the results of the DNA test] or build an Eastenders drum roll into a moment of High Drama, then I’ll just make you (mwa ha ha!) watch the character handle a prop for a second or two, before spilling the beans.

Let’s be honest, fellow novelists, pauses are one of the things that are hardest to write.

I bemoan, on a regular basis, the fact that I have to indicate pauses somehow: it’s the one thing that makes me think, hmm, should I maybe try screenwriting instead of fiction? I’d LOVE to just bloody put some brackets around the word (Pause) and let the actor work his or her magic on screen, instead of inventing new and cunning ways of suggesting the passage of time. You’ve gotta show, not tell, yada yada yada. Just straight out saying: she paused, or he hesitated, makes me upset with myself. Not angry (as your mum would say); just disappointed.

For those card-carrying members (such as myself) of the Show Not Tell Club (we meet Fridays at 4 round the back of a jazz club in 1959 if you’re interested in joining us) choreographing characters can be hard. Did anyone watch Agony and Ecstasy, the frankly wonderful documentary about English National Ballet? In episode 3, the one I’ve linked to, the ENB’s annual Nutcracker production was very nearly derailed by the massive procrastination of shaggy-haired pipe-smoking choreographer Wayne Eagling. 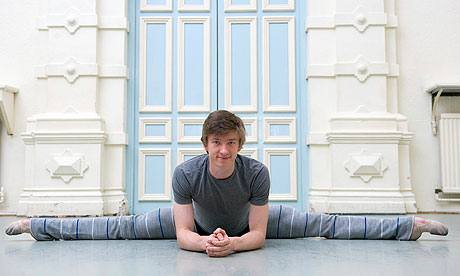 This is not Wayne Eagling; this is ENB dancer Vadim Muntagirov, who is (let’s be honest) more fun to look at.

A stage full of dancers, a pit full of orchestra, and 12 minutes of the ballet still to be written. A hugely stressful situation, I’m sure you’d agree.

Uh-huh. I wish I was Wayne Eagling. At least, when you’re moving real dancers around, you have music already written and people that, you know, actually exist. I mean, God, you all know I love writing – I love, love, love it – but even though English is the best language on the planet (biased, yup, but also IT JUST IS) and has the most words (probably) I’d like some new synonyms, please, English language. I am bored of the existing ones for:

New, clever, non-cheesy ways of relating these events would also please me:

Although, to be fair, it’s probably easier than this…

Look at him fly!