Hemingway wrote naked (allegedly); Agatha Christie wrote anywhere – even in the bath. Kerouac lit a candle before he began (and blew it out again once finished). Simone de Beauvoir drank tea first, writing from ten until one. Murakami (Haruki this is – not sure what Ryu gets up to) puts her laziness to shame: he gets up at 4 a.m. to start writing (and spends his afternoons running). So too does Barbara Kingsolver (wake up at 4, that is). Kurt Vonnegut interspersed words with push-ups. Truman Capote wrote lying down. Stephen King even writes on his birthday. James Joyce was fond of blue pencil. Finnegan’s Wake was written with crayons on cardboard…

And so it goes on. How do you write? Naked, with crayons, immersed in water? Perhaps you have to be facing east, or wearing your favourite knickers? Perhaps, like Agatha, you can write anywhere (washing dishes, she said, was a great time to think about plot). What inspires you? What gets you started? When I teach beginners’ classes, I always give prompts for my students to write from, and I make those prompts as concrete as possible: the smell of wet washing; the itch of head lice; the tap of a footstep. The thing is, no matter how ‘pro’ you are, as a writer, you’re always responding to prompts, though it might be that you don’t even notice the prompt anymore, that you don’t even realise you heard it, or saw it: with practice, it gets to be natural. Writers go out in the world, like Frances in Sarah Waters’ The Paying Guests, and recharge themselves ‘like a battery’.

A couple of weeks ago I gave a reading at the Sound and Vision festival. If you’re going to read Gothic fiction, it might as well be in a candlelit mediaeval church (named for a saint who was roasted alive on a gridiron, no less) and it might as well be followed by a showing of Nosferatu (you can watch it here), a masterpiece of German expressionist cinema from 1922 (and memorably remade by Werner Herzog 57 years later), with a live, original soundtrack courtesy of Minima (a taster of that available here.) 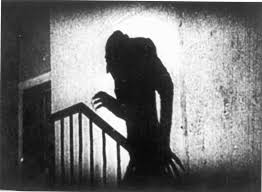 For me, the first ten minutes didn’t work. The music jarred, the story was duller than I’d remembered it, the church was very cold, my wine was almost finished. And then, just as suddenly as my brain had begun to complain it was bored, I was sucked in – hook, line, and sinker – by both film, and music. A searing cello solo worked like a charm. The sepia faces were beautiful. There were shots unafraid to be long, to be lingering – unashamedly arty (if the concept of unashamed artiness in cinema existed then; I’m not sure) – and, above all, too, we were watching a film that is 92 years old as I write (although maths has never been my strong point; do correct me if I’m wrong). We were watching a 92 year old sunset, captured forever (thank god for the last surviving print) on celluloid. We were watching young children, and adults, and animals. We were watching the dead.

I’d been vaguely unsatisfied with the reading I’d given (I’m getting to realise that ‘vaguely unsatisfied’ is a common complaint among writers), and thoughts of the ‘shall I give up?’ variety had been crossing my mind… and then this. This extraordinary film. This extraordinary testament to the point of continuing to make art. And it wasn’t a flawless film, of course: but, fleetingly, it was brilliant. It reached in and spoke to my soul. (And I say this as an atheist.) On this occasion, the moving image was truly moving. It said things to me about the human condition – and that, ultimately, is what I’m always looking for. It is very strange indeed to be alive. It is stranger than strange. And, of course, I like blockbuster rubbish that makes me forget that I’m going to die, one day, but I also like art that reminds me. Nosferatu recharged my artistic batteries, as if Murnau had risen, somehow, from the grave to say: ‘Lynsey, don’t give up. What you’ve written today may be Scheisse, but what you may write tomorrow – well, that might be wonderful.’

As I write, I have owls on my desk: not real owls, naturally (although that would be great), but one made of stone, and one made of clay. And those owls (barring accidents) will outlast me. (Their eyes have an especially penetrating quality as I contemplate this.) Being mortal – bio-degradable, you might say, like an eco-friendly shopping bag – every particle of myself will be gone from this earth at some point in the future. I’ll see my last sunset, I’ll write my last sentence, I’ll watch my last film. It would be nice, I think, to leave something behind, like those flickering, yellow-tinged images that we watched, sipping wine, through the candlelight. The literary equivalent of a 92 year-old-sunset. Or, at the very least, a stone owl.