I am no longer going to link to this post, nor name the author. Perhaps it is unfair to single out an individual and perhaps it detracts from the larger battle. Perhaps it should also be noted that individuals can be placed under pressure by companies for whom they work.

Nevertheless, this particular individual was happy to sling the first blow by suggesting that those who sit on the sidelines shouting and moaning about his employers, Inspiration Trust, were basing their observations on nothing more than ‘lazy twitter comments’.

Here’s one of these lazy twitter comments. Actually, it took me a whole four seconds to take that photograph. Another ten seconds or so to upload it and a minute or two to compose an appropriately concise slogan. 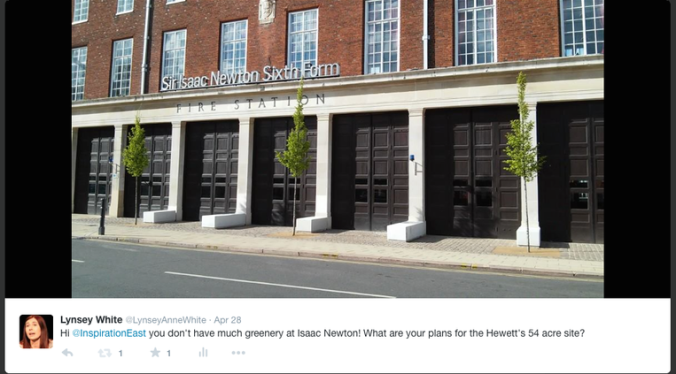 But it’s taken weeks and weeks and weeks of being ignored by the Department for Education and Inspiration Trust for me to reach the point of snark. If de Souza had come and fecking well asked if we wanted to give her our 54-acre school site, worth approximately £60 million, we’d have told her very politely: ‘No! But thanks for asking.’ and sent her on her way.

However she has never asked. And never will.

People ought to ask. They really ought. Along comes a group of venture capitalists and Tory donors. Along they come. And they can prise your locally-owned school from your poor, cold fingers, and snaffle the freehold, and cream off the profits from businesses run on the site (never mind that Norwich taxpayers paid for that site), and splurge taxpayers’ cash on designer tea sets and furniture (£420 for a Vera Wang tea set; over £3000 for two armchairs) whilst advertising for cut-rate unqualified teachers and driving away the ardent, the outspoken, the unionised… (Look at their staff turnover if you don’t believe me: it isn’t just the unionised pains-in-the-butt, either…)

They’re not great at IT, either, in spite of their chain’s initials…

Neither has Sir Theodore Agnew, the chair of Inspiration Trust, come cap in hand to Hewett and said, ‘Hello, lovely yokels! May we please have your school and all its land?’ Theo Agnew is also, since you probably didn’t think to ask but ought to have done (because, hello Tory democracy!), the chair of the Department for Education’s Academies Board. Oh, and also he sits on Policy Exchange, the right-wing think tank which ‘advises’ the Department for Education on all matters educational. Did I forget to mention he’s great friends with Lord Nash, the DfE’s Academies Minister? Perhaps I neglected to say that he’s also a Tory donor, to the tune of several hundred thousand pounds. Oh, and one last thing! He made his fortune outsourcing work to India, where graduates could happily earn a pittance for doing jobs for which he’d have had to pay unskilled British workers more.

Actually it isn’t the last thing, since I probably ought to say that he went to an independent school (Rugby, I think, off the top of my head), failed his eleven plus, and has a crinkly fat-cut chip on his shoulder about anyone and anything to do with education.

Such are the men (for they are, primarily, men, with Trophy Woman Rachel de Souza providing the female touch) who are taking slow hold (and I said ‘slow’ because I like the way slow and hold sounded together, quite menacing, although in fact they’re doing it rather quickly; rather bloody quickly indeed) of our education system and please, please, please will everyone stop wetting themselves over the r*yal baby and find the inspiration to sit up and say, actually, no, we don’t want all our schools to fall into the hands of private businessmen who do this sort of thing with them.

And hence my journey: not to work for Inspiration Trust, but to oppose them.

This is where we are heading if we don’t do something now.