So I’m going to get a tattoo. Which is weird, because I don’t even like tattoos. But I heard about this project and immediately it seemed to fit. 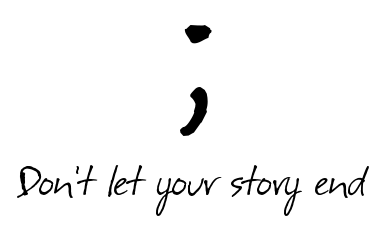 First off, it’s a semi-colon. It’s punctuation. There can’t be many folks alive who love punctuation as much as I do.

But second, and more importantly, it’s a sign that you’ve survived depression. It’s a sign, in my case, that I’ve survived a suicide attempt, and you can read about that here if you’d like to (because, as people keep pointing out to me, I am very, very open about these things). What it means is: you could have ended your sentence. But you chose not to. Or, in my case, my own ineptitude stopped me from ending my sentence… But, hey, I was sixteen. What did I know? Very little (although, natch, I thought I knew everything).

After a bit of debate on Facebook I’ve decided where to have it, too. On the back of my neck, at the top of my spine. This means, of course, I’ll only be able to see it in the mirror.

But this makes sense, because… one of the other things I survived was an episode, ten years ago, when I hated my face so intensely I couldn’t leave the house. I had to go live with my parents. We had to cover all the mirrors up, or take them down, and the ones that were fixed to the bathroom cabinets had to be opened at such an angle that they couldn’t be looked in. Does this make me sound weird? I suppose it does. It’s not something I’m proud of. It happened, though, and since I’m a product of everything – good and bad – that’s happened to me since the second I burst, splat, from my mum’s womb, plastering the walls with blood (so I’m told), I can’t see the point in denying these things. I felt I didn’t have a face. I didn’t feel I existed. This made life difficult. I was just extremely ill, as I’ve been ill before and possibly (although every day I guard against that as well I can) will be again.

But my sentence hasn’t ended yet. Virginia Woolf wrote one that was 199 words long. A sentence is long as a piece of string. I feel unhappy, writing this. Things haven’t gone my way and, yeah, I’m sad. But my grasp on punctuation is as solid as ever. I can really rock a dependent clause. So I’m going to get a semi-colon on my neck because I want to celebrate the fact I’m still alive. I’ve fucked up 99% of things in my life, but I stuck around long enough to have the world’s best daughter and, maybe I’m kidding myself, but I genuinely think I do some good in the world these days.

And I promise my next post will be about writing.

4 thoughts on “A sentence is long as a piece of string.”